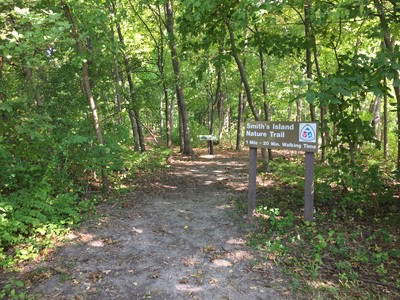 On an island near Lock and Dam 14 on the Mississippi River, this short loop trail offers a pleasant walk through the woods, with excellent opportunities for bird-watching.

Check for nearby geocaches around Smith's Island Nature Trail.

It’s a good idea to drink water or hydrating fluids during the day, especially when you’re active. Bring along a water bottle or hydration backpack on the trail.

From the Quad Cities, travel on US-67 north. After 6.3 miles from the I-74 interchange, turn right onto 181st Street, then immediately bear left onto 182nd Street. After 0.4 miles, turn right. At the river there will then be a dirt parking area on the right.

Facing the river, the trail leaves the parking lot to the left and soon crosses the lock.

Located next to Lock and Dam 14, Smith's Island is largely spared from flooding. As a result, broad leaf forests can mature, which leads to an ecosystem that is more typical of upland areas. The island is home to many birds year round in addition to migratory birds, which makes it quite popular among birders. In particular, the lock is a great place to watch eagles during the winter. Smith's Island is also used by fisherman all year around.

The trail starts off by crossing the lock, which then leads into an open area with two large picnic pavilions (which can reserved through the Army Corps of Engineers). The trail then bears left across a causeway, then enters the woods, which is also the start of the loop. Round trip, the whole walk including the loop is 1.17 miles. Throughout the trail there are interpretive signs to learn more about the ecosystem in the area, as well as a handful of benches located alongside the path.

There is a historical aspect to the island as well. Once owned by a farmer, John Hoepfner, Smith's Island is now owned and managed by the U.S. Army Corps of Engineers. Mr. Hoepfner lived in a farmstead whose foundations, root cellar, and wells can still be plainly seen in the north-central portion of Smith’s Island. He used a hand-pulled ferry to transport his horse-drawn buggy to the Iowa shoreline where he would go to town for supplies to supplement his home-grown diet. John finally gave in to change and started selling one-acre lots to locals who built summer cottages on the shoreline. Little remains of the numerous cottages, outbuildings, and homes that once dominated the shoreline. The development of the 9-foot channel forced those on the island to move. Many of the nicer homes were loaded onto barges and moved downstream to the shoreline in Bettendorf, Iowa. Many small industries were located just across the LeClaire Canal from John Hoepfner’s farmhouse. One of those was a tile works factory that produced tile and bricks from locally obtained blue clay. And also an ice storage house in which blocks of ice were stored for use in home refrigeration. Numerous private individuals living along the Mississippi during this time earned money by cutting buttons from clam shells during the winter. Many riverboat pilots and their families sustained themselves through the “off-season” in this manner.

Since this trail is incorporated with the Lock and Dam it is highly important to follow all signage posted. There are restricted areas on either side of the public area. Photography along the trail and in the picnic areas is permitted and encouraged, however, photography of the Lock and Dam or any infrastructures is not permitted.

The elevation profile above approximates terrain along the specified section of trail and is provided for general information. Use your best judgment to choose trails with elevation changes to match your comfort level. See QC Trails Terms of Use for more information.

Smith Island is managed by the US Army Corps of Engineers.