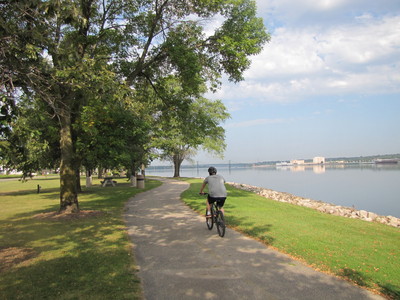 The Mississippi River Trail (MRT) in the Quad Cities Region passes through numerous riverfront communities and countryside; the terrain is flat and surface is asphalt and concrete. Sweeping riverfront vistas are abundant all along the trail.

Check for nearby geocaches around Mississippi River Trail (MRT): Illinois.

Some trails will be slippery after a rain or if they are covered in fallen leaves. Watch your step!

There are many access points and trailheads that MRT (Illinois) trail enthusiasts can utilize throughout the Quad Cities Region. The trail parallels the Mississippi River, and there are numerous trailheads next to or near the road, such as in Sunset Park in Rock Island; Ben Butterworth Parkway in Moline; Empire Park in East Moline; Heritage Park, Illiniwek Forest Preserve, and Fisherman's Corner in Hampton; Shuler's Shady Grove Park in Rapids City; and the riverfront park in Port Byron.

Running for over 60 miles from Rock Island to Savanna, Illinois, the Quad Cities' portion of the Mississippi River Trail in the Illinois Quad Cities is a continuous, flat, hard-surfaced multipurpose trail for all ages and abilities. The trail connects to many neighborhoods, shopping districts, and parks and recreation areas. Sweeping riverfront vistas are abundant all along the trail in Illinois and also along the MRT in Iowa.

In its entirety, the Mississippi River Trail -- coursing along America’s backbone, the Mississippi River, from its headwaters in Itasca, Minnesota to the Gulf of Mexico -- offers approximately 3,000 miles of on-road bikeways and pedestrian and bicycle pathways for the recreational enjoyment, health, conservation and tourism development of river communities, river states, and the nation. The trail provides access and connections to neighborhoods, commercial districts, industrial areas, recreational areas, and historical landmarks at the local, state, and national level.

Sections of the Mississippi River Trail in this region are also part of the Great River Trail (GRT),  the American Discovery Trail (ADT), and the Grand Illinois Trail (GIT). The Great River Trail runs some 66 miles along the Mississippi River from the Quad Cities (Sunset Park in Rock Island) to Savanna, Illinois. The American Discovery Trail traverses the U.S., coast to coast, from California to Delaware for more than 6,800 miles across 15 states.  As it loops more than 500 miles between Lake Michigan and the Mississippi River, the entire Grand Illinois Trail joins together existing and proposed state and local trails to create the state’s longest continuous trail. It hugs historic canals, crosses unglaciated hills, parallels the Rock and Fox Rivers, and includes one of America’s first rail-trails.

The Mississippi River Trail in Illinois is comprised of many local trails along its route. Please refer to the individual trails that are listed under the section "Show Connector Trails" and view trail postings to see their elevation profiles. [Note: some of these connector trails are trails that intersect the MRT, but are not the MRT route itself.]

Suggest a video in the comments below.